Croatia boasts almost 2,000 km of coastline and more than 1,000 islands. Hop on a boat, and youâ€™ll find quiet islands with untouched fishing villages, and bigger vacation getaways with stunning beaches. Drive along the shore and find quaint seaside towns and epic cities steeped in history. Croatiaâ€™s coast is a chest of maritime treasures waiting to be opened.

The famous walled seaside city lying at the foot of a jagged mountain, Dubrovnik is Croatiaâ€™s most popular tourist destination. It sits on remains that go back to the 7th century, a medieval town reshaped by a history of Byzantium, Venetian, and Austro-Croatian empires.

Dubrovnikâ€™s historic core seems to have been suspended in time, filled with churches and surrounded by some of the most impressive city walls on the planet. Outside the walls, thereâ€™s Mediterranean elegance, gardens exploding in colourful bougainvillea and oleanders, trees with figs and peaches, and of course, the stunning Adriatic and its nearby beaches.

Thereâ€™s almost no choice but to begin with the City Walls. They are jaw-dropping and demand your attention. Dating back to the 12th century (with some parts going as far back as the 10th), these walls have withstood the countless enemies and still managed to maintain their grandeur (they even survived a modern attack in the 1990s breakup of Yugoslavia). Reaching 25m high and stretching 2km around the old city, take your time walking along this piece of history (and waving to the friendly Croats below).

Towering above Dubrovnik to the north, the 412m summit of Mount Srd offers stunning views of the walled town below and a panorama of the whole coast. Take the cable car up and enjoy the pristine view. 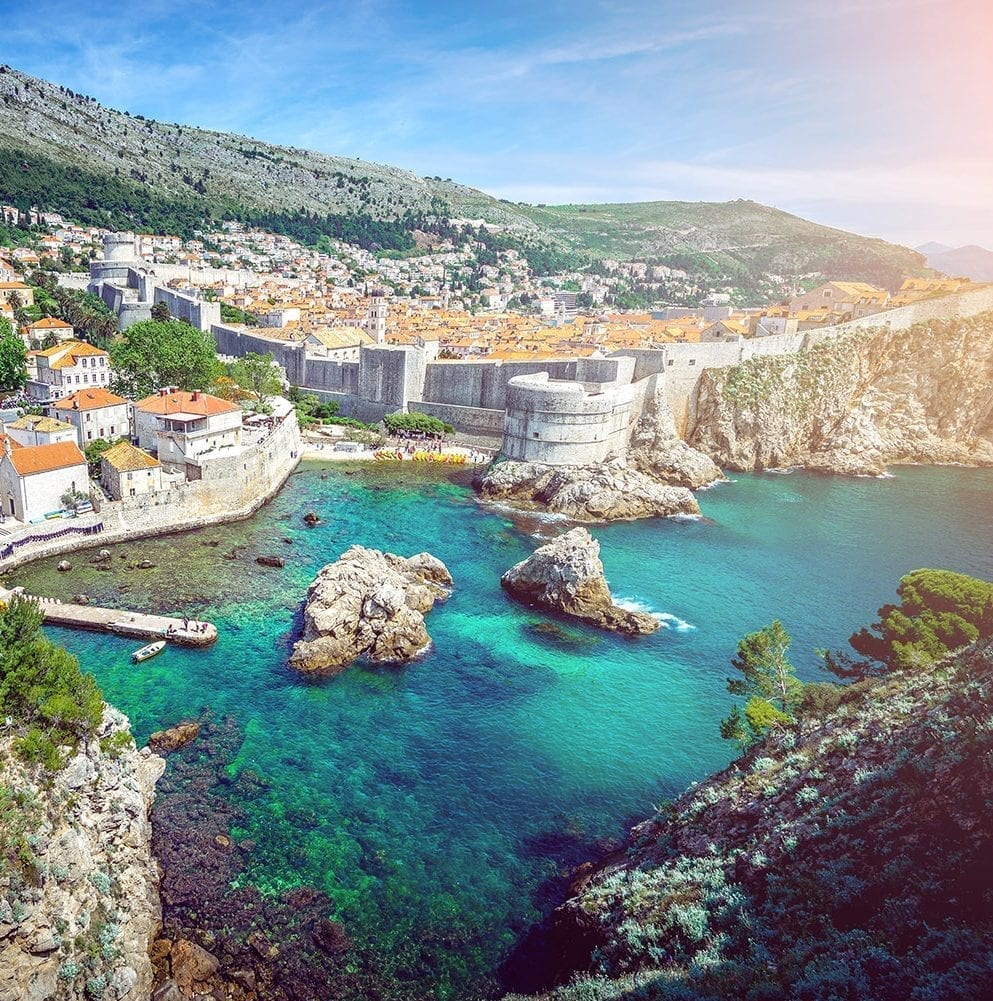 Make sure to check out these classic sights in Dubrovnik: 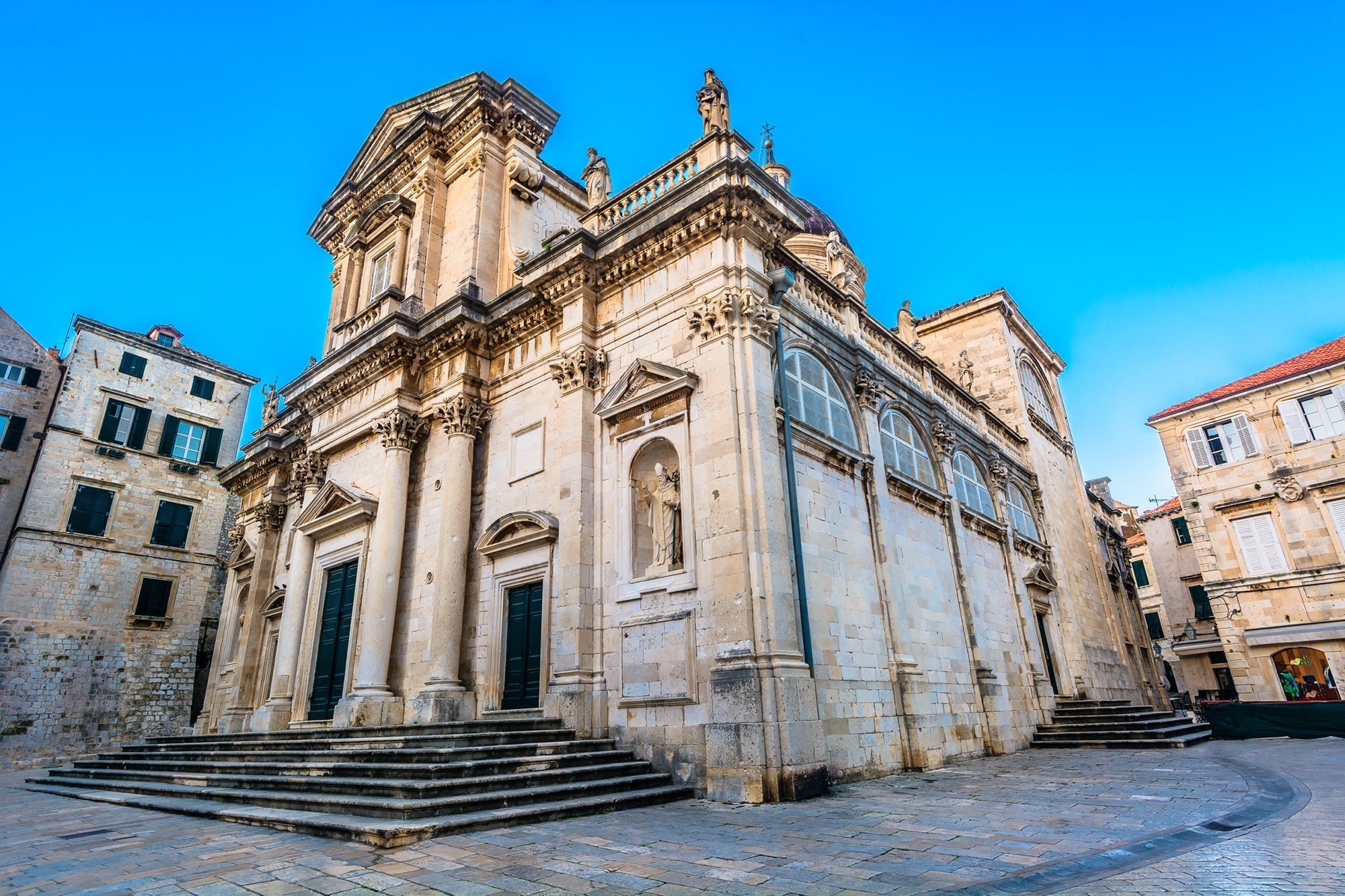 The Cathedral of the Assumption

The Cathedral of the Assumption goes all the way back to the 7th century. Legend says its 12th century renovation was a gift from Englandâ€™s King Richard the Lionheart. He had been shipwrecked on nearby Lokrum, and was brought to safety by locals - nothing says thanks for saving my life like a big old cathedral, right? The cathedral is famous for its fine altars and gilded treasury, filled with relics dripping in gold and silver. 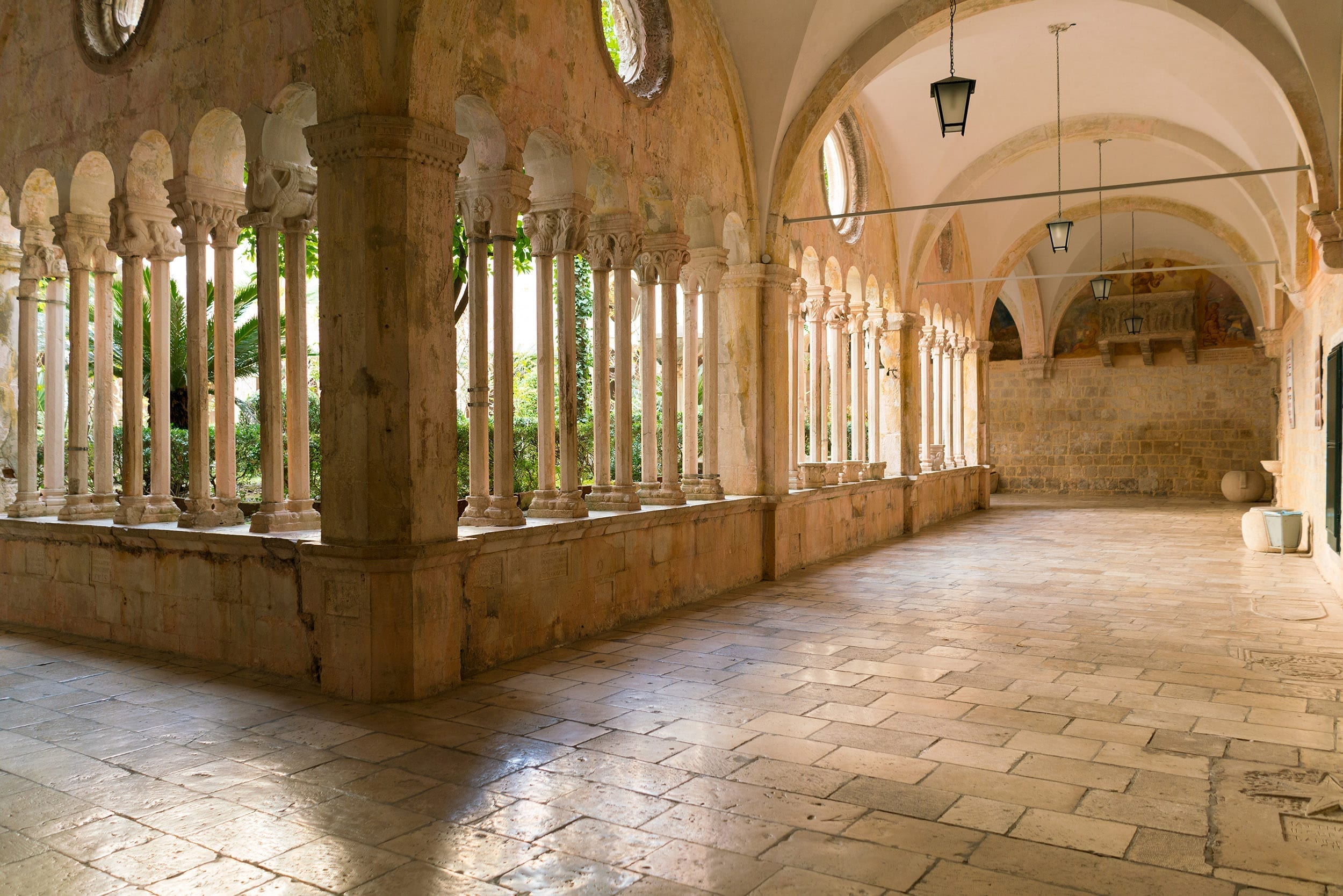 The Franciscan Monastery is like one giant cabinet of curiosities, complete with a pharmacy thatâ€™s been in business since 1317. Apart from the pharmacy and the curated collection of treasures in its museum, the monastery is a magnificent example of late-Romanesque architecture, with its stone walls and 14th-century abbey. 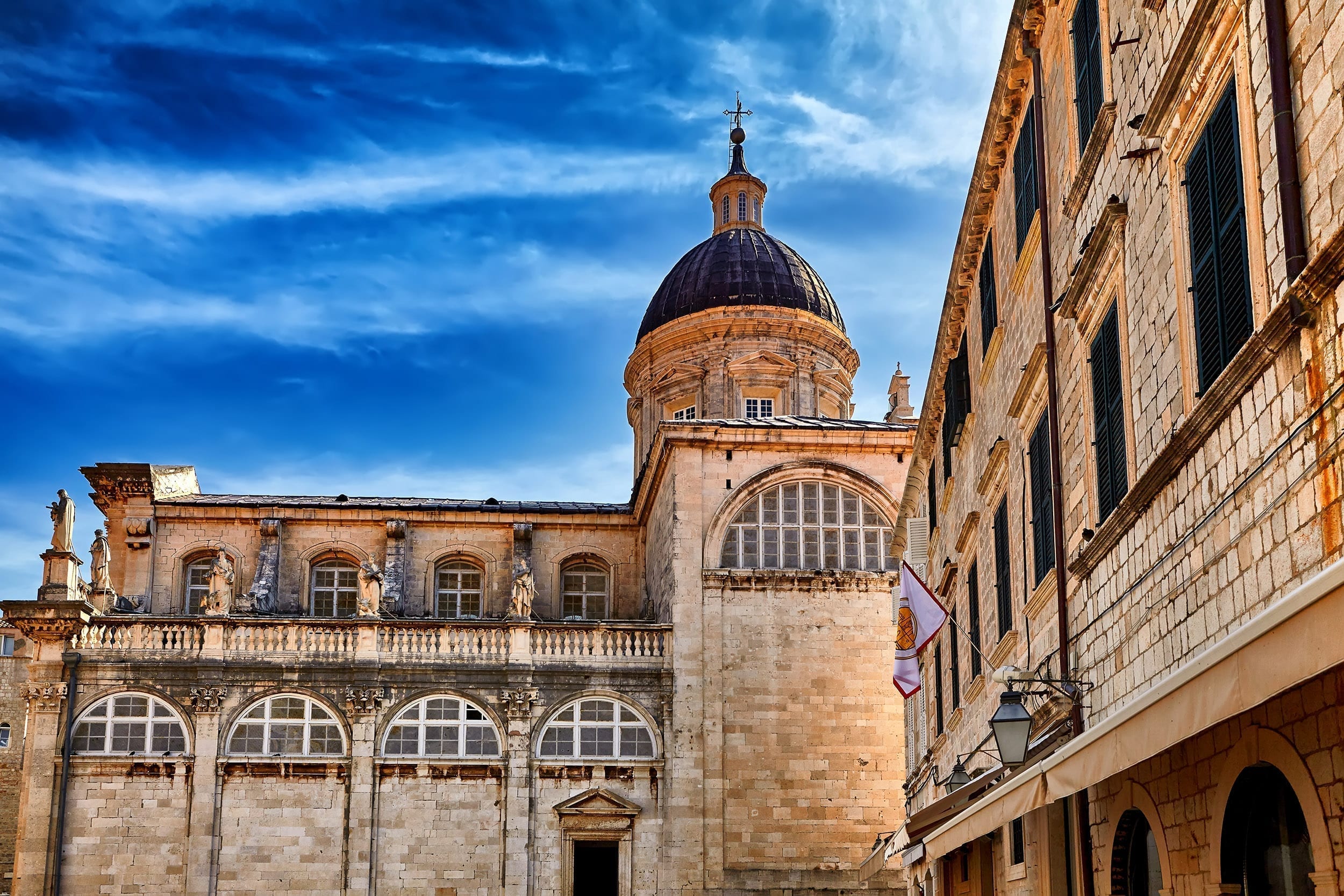 The imposing Rectorâ€™s Palace, built in the late 15th century for the elected rector who governed Dubrovnik, is a Gothic-Renaissance palace thatâ€™s been turned into the Cultural History Museum. This impressive building is filled with artfully restored rooms, portraits, and coats of arms and coins that evoke the timesâ€™ glorious history.

Croatiaâ€™s second-largest city, Split, is a great place to see authentic Dalmatian life in action. Always buzzing, this dynamic city has the perfect balance between history and modernity. Within the walls of the old city, walking on ancient stone smoothed with time, youâ€™ll find bars, restaurants and shops thriving as they have for thousands of years. While youâ€™re here, donâ€™t miss seeing Diocletianâ€™s Palace, which was built for the late Roman Emperor in the 4th-century A.D. and is now a UNESCO World Heritage Site. Then, continue through the old town and out along the tree-lined promenade, letting this unique cityâ€™s charm guide you along the way.

The ancient capital of Dalmatia, Zadar is a mix of medieval heritage and a bustling local life of cafĂ©s, art, and unique architecture. Zadarâ€™s incredible Sea Organ, designed by local architect Nikola BaĹˇic, is truly unique. Tucked behind wide slabs of concrete steps which descend into the water, the system of pipes and whistles sing hypnotically to the rhythm of the seas. The cityâ€™s old town is charming and filled with Roman ruins and medieval churches, while the surrounding areas have fantastic vineyards and local food producers (look for local olive oil and organic cheeses). 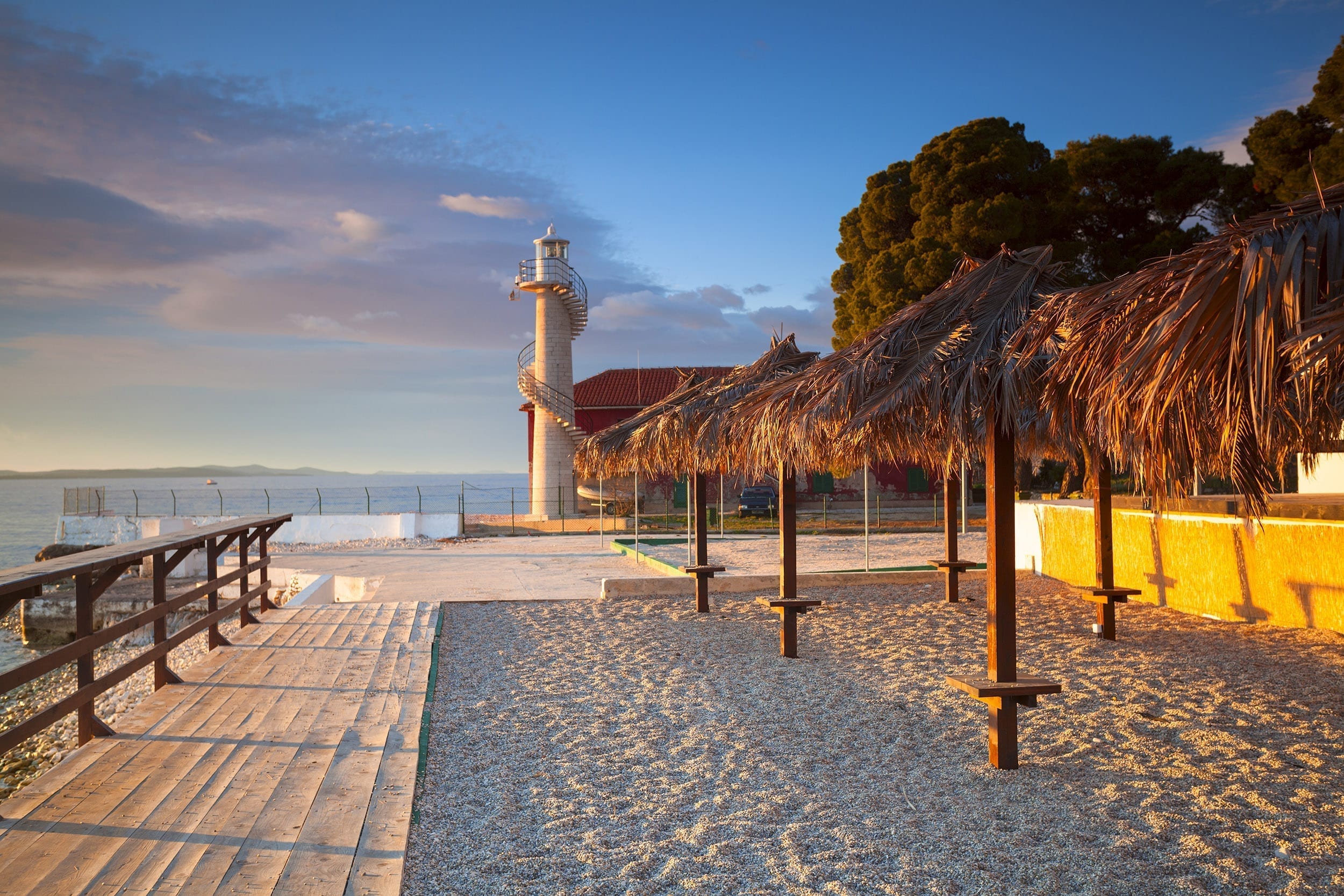 Next, explore Istria, the largest peninsula in the Adriatic, shared by Croatia, Italy and Slovenia. Itâ€™s here that youâ€™ll find Rovinj, a spectacular ancient town that sits at the tip of a headland, overlooking the Adriatic. Its tangled web of old-world streets are packed in tight, squeezing towards the seafront. Climb the bell tower of St Euphemiaâ€™s Church for wonderful views of the town, nearby vineyards and small forested islands. Take a stroll around the lovely harbour and sample some of the best seafood and uniquely Istrian cuisine. 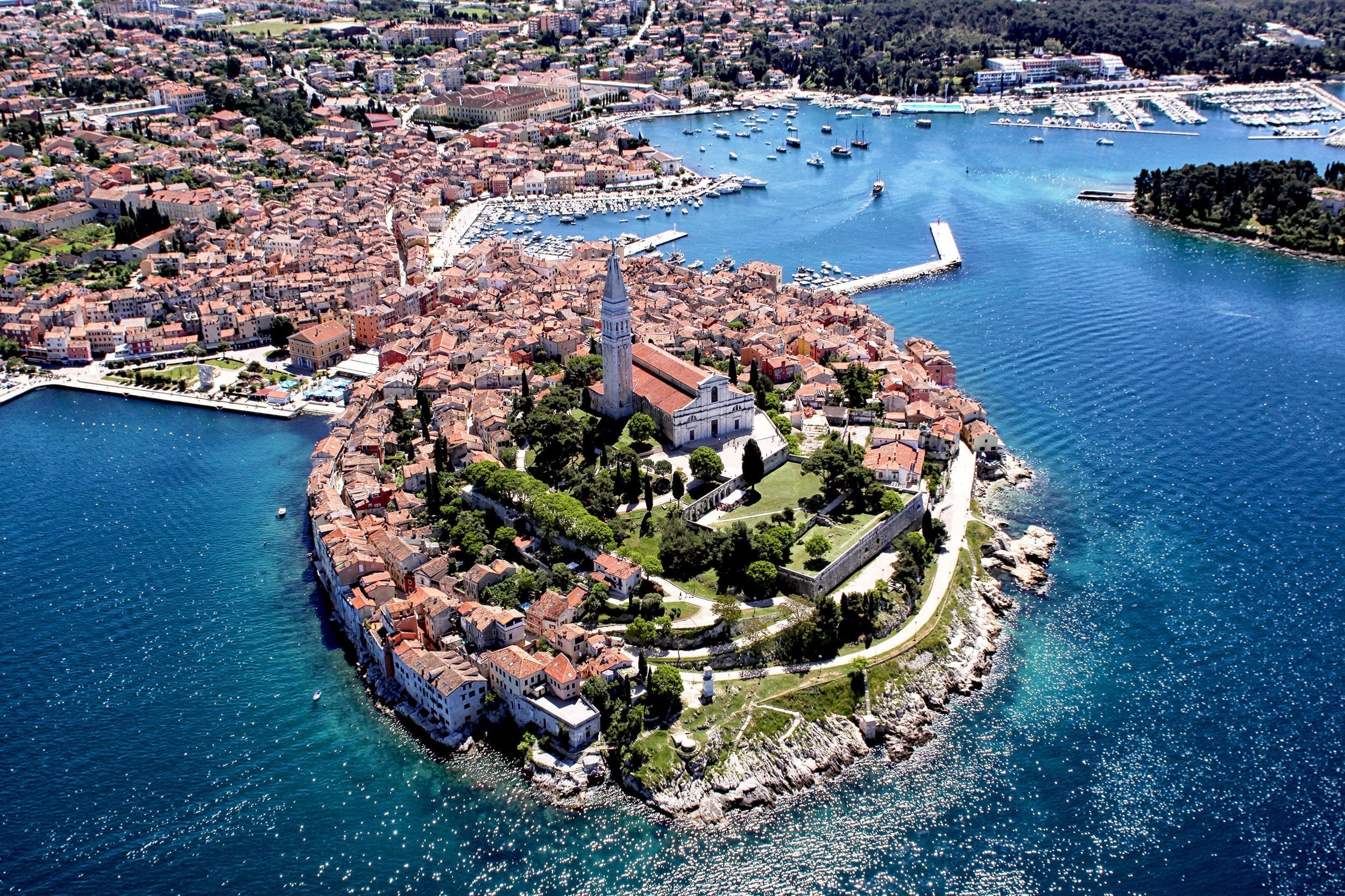 Famous islands and beaches in Croatia 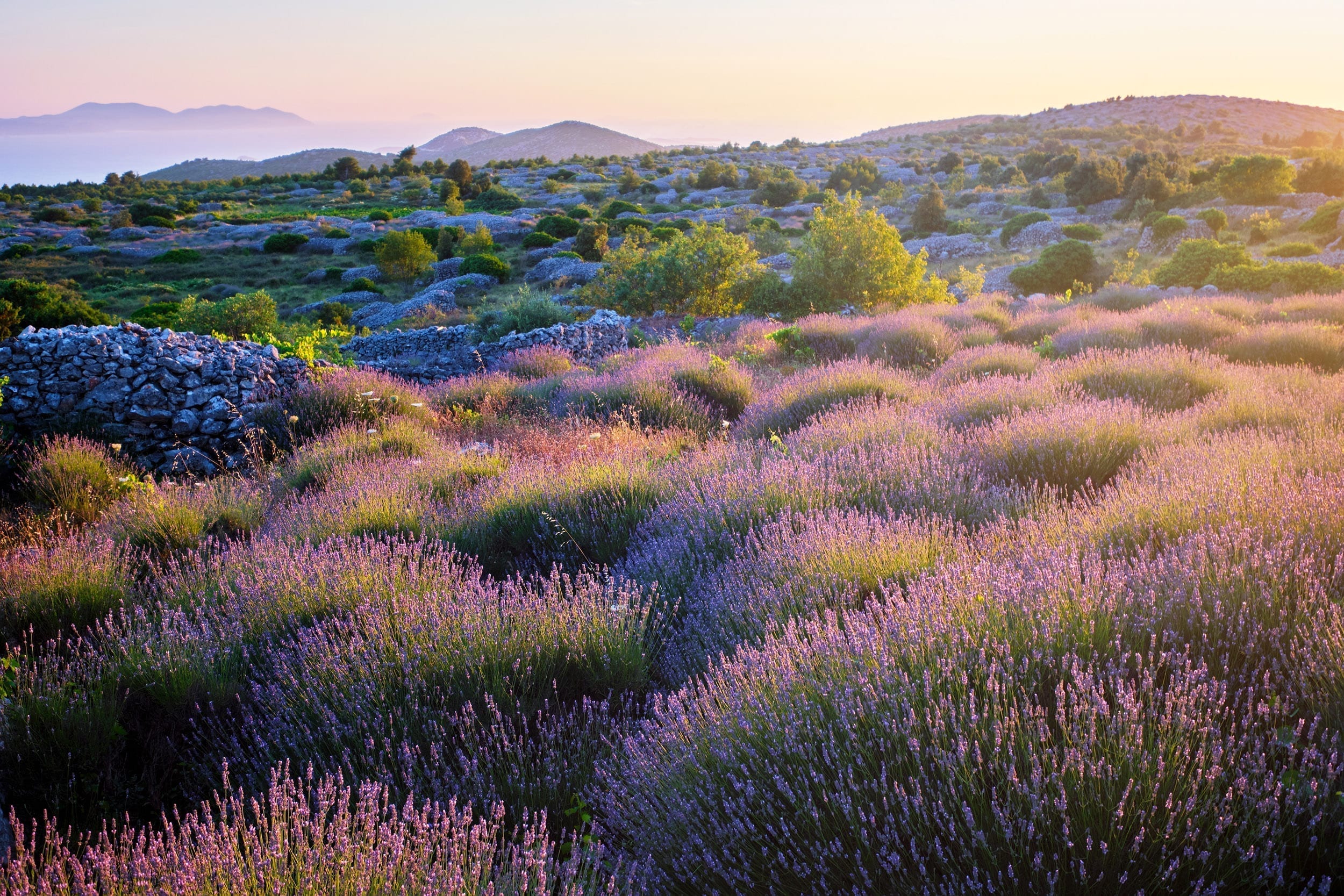 A favourite with celebrities and families alike, Hvar is the most well-known of Croatiaâ€™s islands. The landscape is coloured by picturesque lavender fields, olive groves, and vineyards, with sprinkles of stonehouse villages along the hills and overlooking the sea. Meanwhile, Hvar Town rivals Dubrovnik in terms of its architectural glories, with some of the Adriaticâ€™s best options for island drinking and eating. 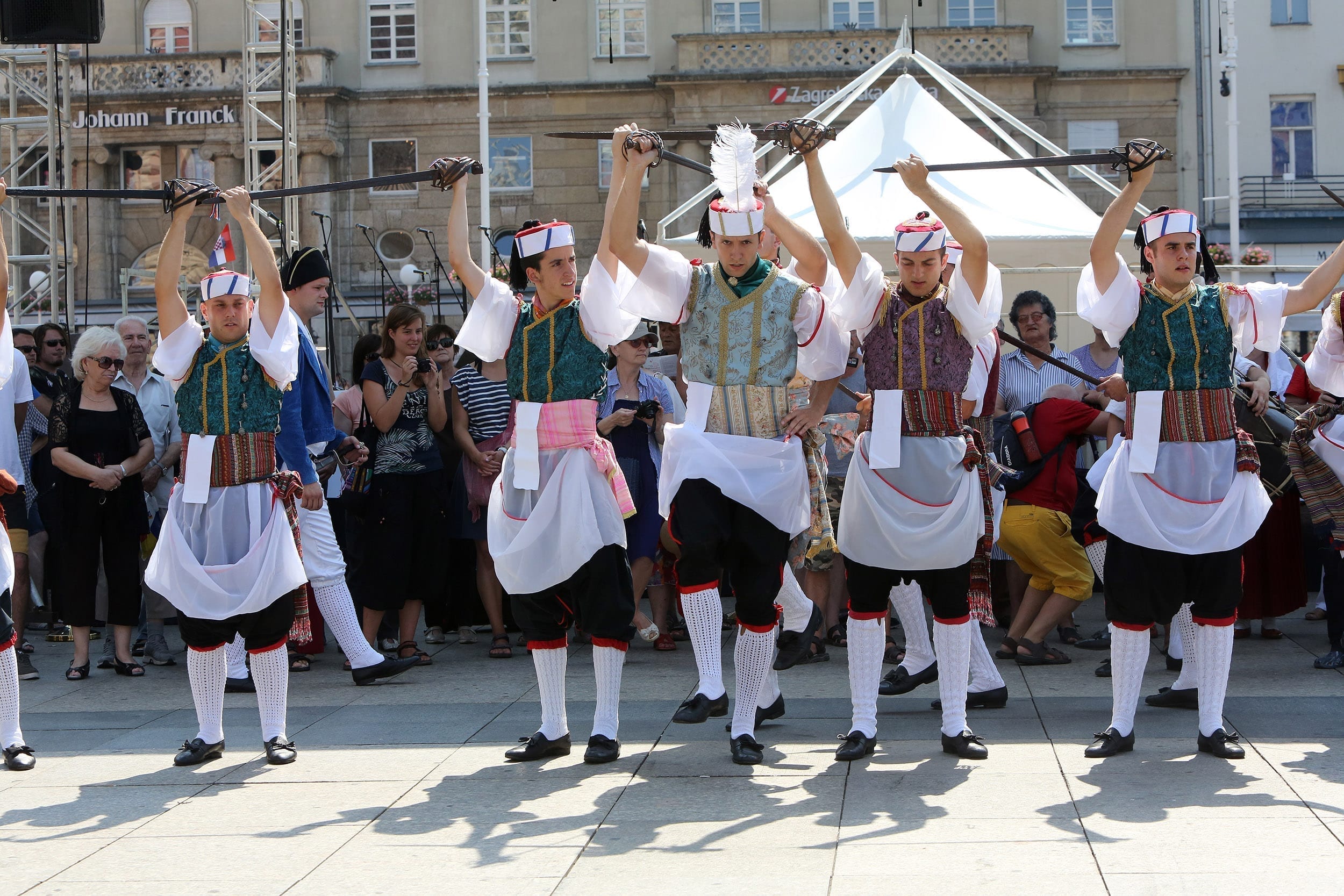 Tradition is still alive and well in Korcula, an island filled with small-town atmosphere and traditional folk music and dances. Korcula is one of the biggest Adriatic islands, rich in vineyards, olive groves, small villages, and a glorious waterfront old town. Wine lovers will adore the local nectar, arguably the best of all Croatia (a special white is produced here from the indigenous grape poĹˇip). Donâ€™t forget to visit St. Markâ€™s Cathedral, the 15th-century cathedral built from Korcula limestone. 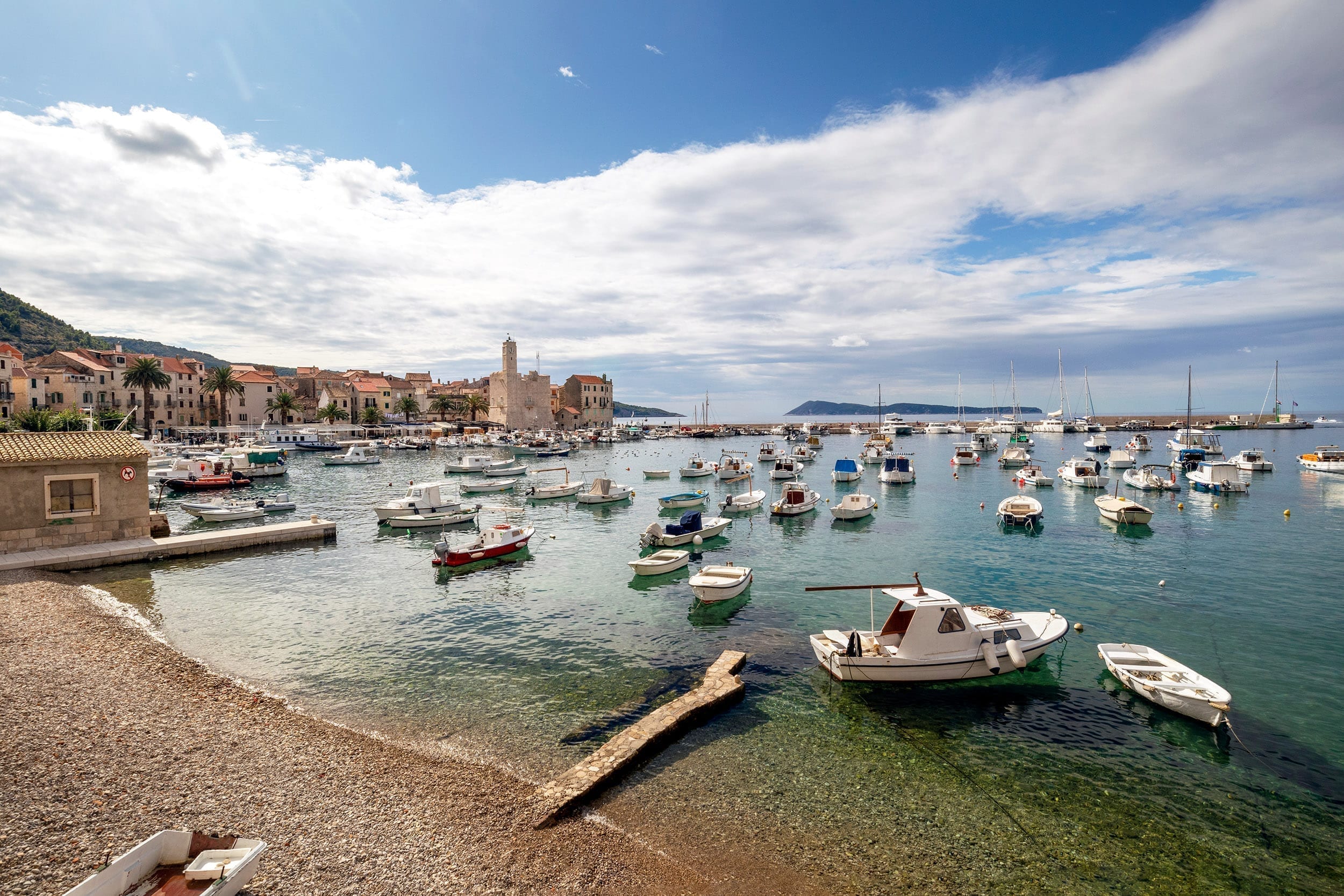 A military base until 1989, the island has remained low-key and unspoiled. Youâ€™ll be taken away by the islandâ€™s gorgeous beaches and bays, colourful fishing boats bobbing in crystal waters, backdropped by lovely Venetian-style houses and palm trees. Vis Townâ€™s limestone passageways, 17th-century buildings, and peaceful seafront will make you want to wander around all day long. 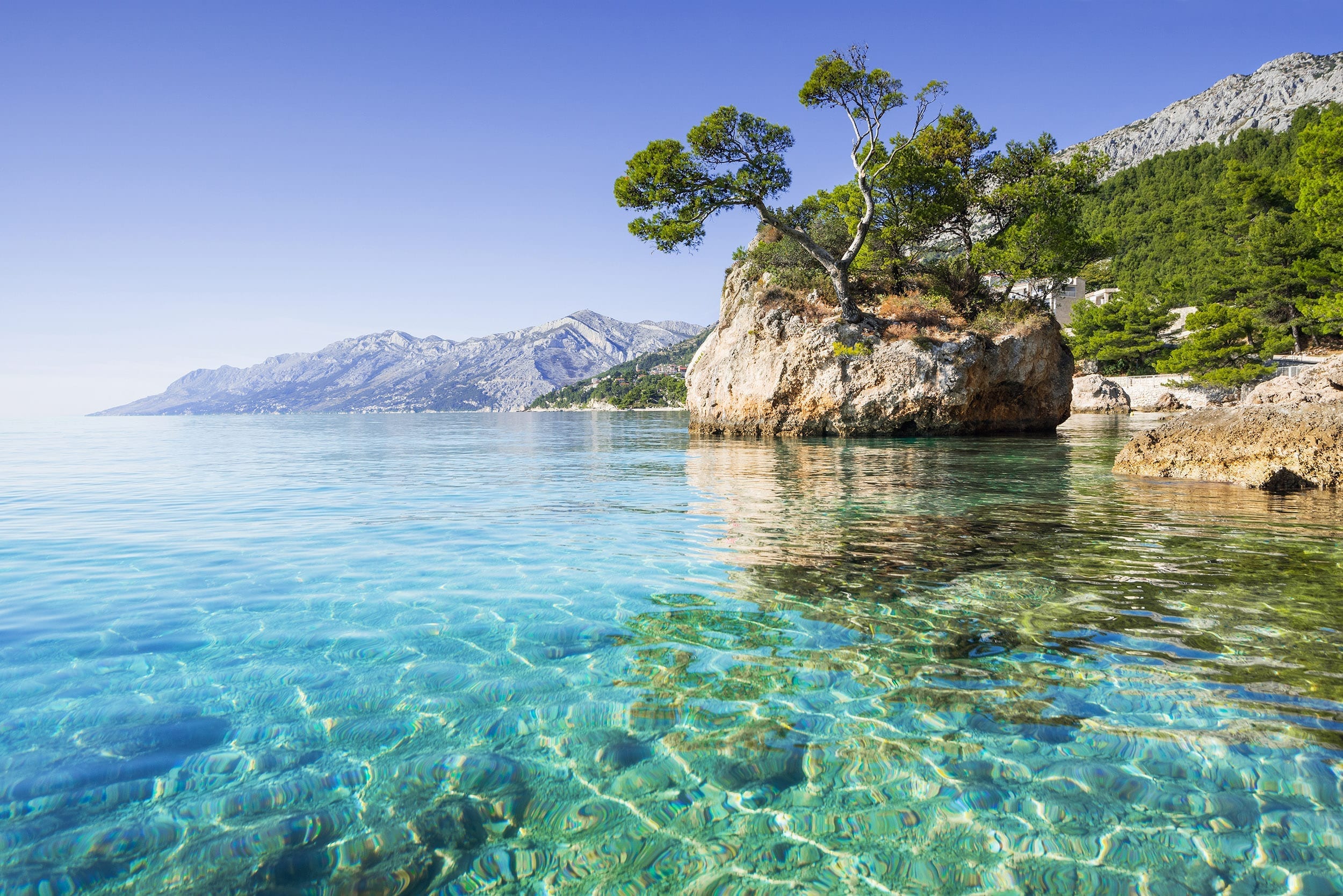 A part of the longest and potentially loveliest coastline in Dalmatia, Brela is a beach heaven with the vibe of a lost paradise. Six kilometres of pebble beaches curving around lovely coves, surrounded by a thick forest of pine trees. Brela town offers a shady promenade lined with bars and cafes, letting you walk up and down the coast and admire the coves as the sun sets. 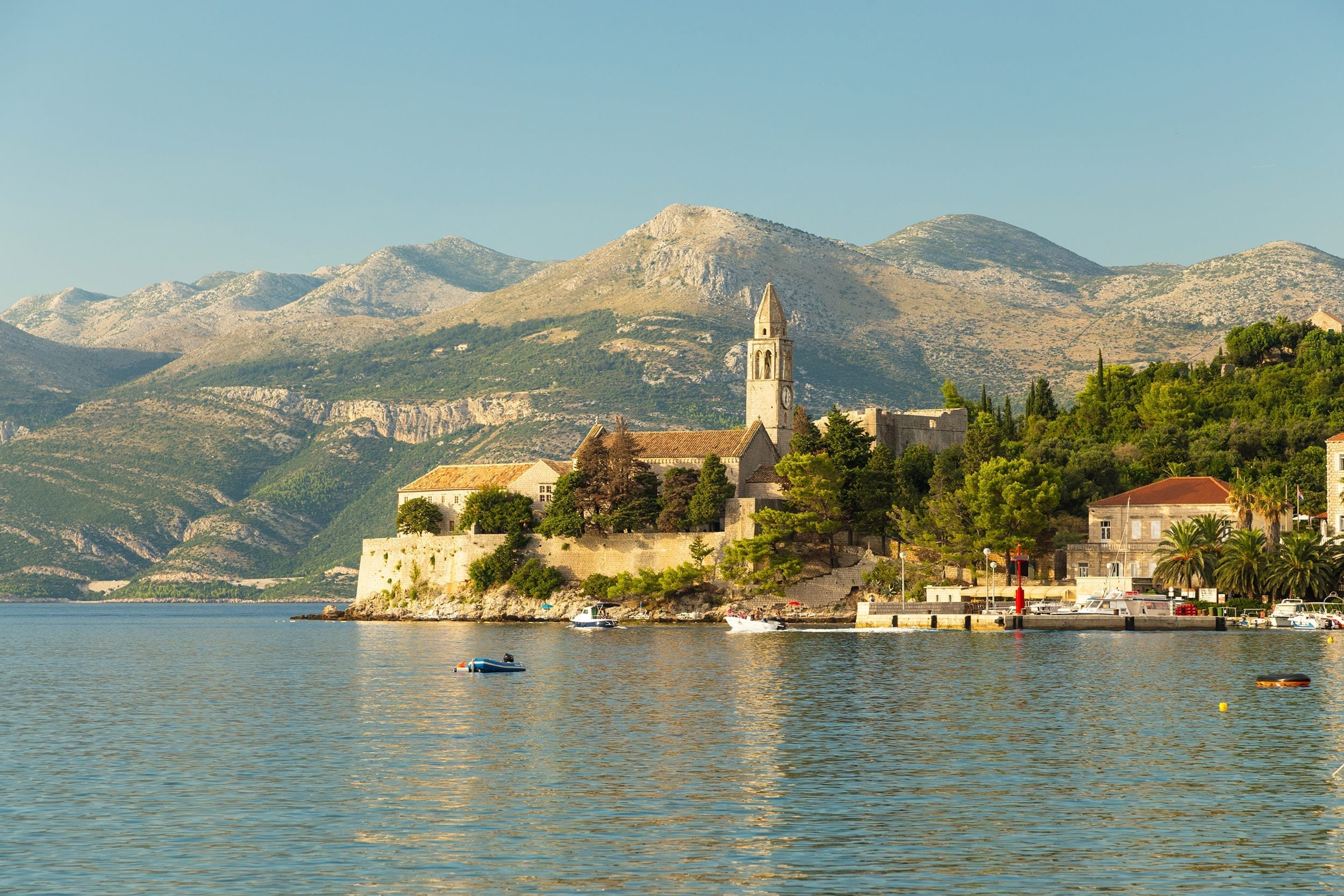 Avoid the tourist crowds and take a short trip to these unspoiled and lush car-free islands. Only three of the Elaphite islands are inhabited â€“ Kolocep, Lopud and Ĺ ipan â€“ and you can visit all three in a day on tour from Dubrovnik. You can enjoy hikes or bike rides around these lovely little gems, taking in the scenery of traditional olive groves and vineyards. Looking at the aged single-family homes with terracotta roofs and planters in the windows, you would be forgiven for forgetting what century it is.

YOUR INBOX IS IN NEED OF A LITTLE WANDERLUST.
OUR NEWSLETTER WILL TAKE CARE OF THAT.

We use cookies to ensure that we give you the best experience on our website. If you continue to use this site, we will assume you are on board!AcceptPrivacy Policy